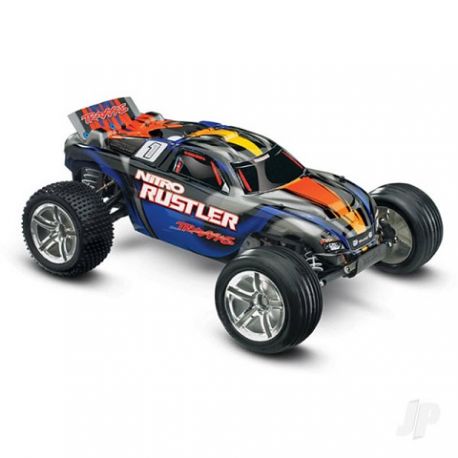 The Nitro Rustler is fully assembled, with pre-glued tires, a mounted and trimmed ProGraphix body and dialed-in electronics. But we didn't stop there, a high-quality 6-cell EZ-Start battery is included with a 2-amp DC peak detecting fast charger. A 500 cc fuel bottle is also included for fast fillups, and there's even a spare glow plug and air filter oil to keep you running strong. A precision specialty tool set is also included for easy servicing. Almost everything you need to experience nitro monster fun is already in the box.

Hard-Charging 50+mph Performance
The Nitro Rustler is the first name in high performance 2WD nitro stadium trucks. Powered by the proven performance of the TRX 2.5 Racing Engine, Nitro Rustler totally out-muscles the competition with top speeds beyond 50 mph! The TRX 2.5 also pumps out the torque for brutal, wheel-standing launches and absolutely ruthless acceleration. The sleek body design cheats the wind with its smooth curves and low-slung stance, while the outrageous graphics dominate with style. The separate wing securely bolts to the body with precise aluminum hex hardware. Chrome 2.8 Twin Spoke™ rims are wrapped with pre-glued Alias™ step-pin tires in the rear and Alias™ ribbed tires up front. The high-tech rubber compound ensures great grip on a variety of surfaces. Grey-molded composite parts are thoughtfully integrated to enhance the look of the chassis. Fast, light, and loaded with power, Nitro Rustler's power-sliding, dirt roosting attitude will have you reaching for the throttle again and again. Where Power Meets Technology® Nitro Rustler's TRX 2.5 Racing Engine is nothing short of amazing. It is the most advanced engine in its class and comes loaded with all the hottest performance hardware. The two-needle composite slide carburetor, trick porting, and free-flowing rear exhaust deliver class-leading horsepower and high-revving speeds over 50mph. Plus only Traxxas has the true push-button starting convenience and safety of the EZ-Start® Electric Starting System. Traxxas makes nitro easy so that anyone can experience the hard-charging action and intense driving excitement Nitro Rustler delivers. Hammer the throttle anywhere in the power band and Nitro Rustler responds with searing acceleration and the sound of pure, high-revving nitro power. Traxxas Stability Management TSM® allows you to experience all the extreme power, speed, and acceleration that was engineered into your Nitro Rustler making it much easier to control on common slippery surfaces such as loose dirt, smooth concrete, and even ice and snow. Punch it off the line and TSM goes to work sensing the vehicle’s direction and making steering corrections to provide straight-ahead full-throttle acceleration without fishtailing, spinouts, and loss of control. TSM also works during cornering, first making intuitive corrections to maintain your line, and then allowing you to hammer the throttle earlier in the turn for much faster exit speeds. Braking is dramatically improved as TSM works to keep you arrow straight until you come to a complete stop. Ready-To-Race®
Nitro Rustler comes professionally assembled with the powerful TQi™ 2.4GHz radio system; a detailed setup guide, and one of the most powerful Ready-To-Race® engines available. Plus, Nitro Rustler is backed by a team of RC pros who aim to provide the highest level of factory support possible. We're with you every step of the way to answer questions and help you get the most from your Nitro Rustler. Toll-free* support is available via telephone, e-mail, or online. The TRX 2.5 Engine is backed by the Traxxas Power Up Plan that makes it simple and affordable to upgrade to a brand-new engine and even more power down the road. As with any Traxxas model, Nitro Rustler is about experiencing total performance and satisfaction, not just in the truck, but also with the company that stands behind it.

Where Power Meets Technology® The TRX 2.5 Racing Engine is nothing short of amazing. It comes loaded with all the hottest performance goodies. The two-needle composite slide carburetor, trick porting, and free-flowing rear exhaust deliver unmatched, class-leading horsepower that rips huge wheelies and pushes the Nitro Rustler past 50mph! Plus only the TRX 2.5 has the push-button starting convenience of the EZ-Start® Electric Starting System. Traxxas models deserve the world's most advanced Ready-To-Race® radio system. The radio system after all is the sole connection between the driver and machine. It has to be precise, comfortable, powerful, and reliable. The Traxxas® TQi™ radio system arrives with a full complement of tuning features; long-range, high-output, 2.4GHz signal, and proven Traxxas reliability for rock-solid performance. It's so advanced; it doesn't even need an external antenna. However, the most important feature may already be in your pocket. The TQi can be equipped with an optional Traxxas Link Wireless Module (#6511) that turns your Android, iPad®, iPad mini®,  iPhone® or iPod touch® into a powerful tuning tool for your Traxxas model. The full-color display combines with the Traxxas Link™ App to deliver an intuitive, high-definition, full-color graphical user interface that unlocks the mysteries of optimizing your radio system for ultimate vehicle control.

Traxxas Stability Management TSM® makes it possible to experience all the extreme power, speed, and acceleration that was engineered into Traxxas models by making it much easier to control the vehicle on common slippery surfaces such as loose dirt, smooth concrete, and even ice and snow. Punch it off the line and TSM goes to work sensing the vehicle’s direction and making steering corrections to provide straight-ahead fullthrottle acceleration without fishtailing, spinouts, and loss of control. TSM also works during cornering, first making intuitive corrections to maintain the vehicle’s line, then hammer the throttle earlier in the turn for much faster exit speeds. Braking is dramatically improved as TSM works to keep Traxxas trucks arrow straight until they come to a complete stop. Traxxas TSM gives all the benefits modern electronic stabilization has to offer without intruding on driving fun or introducing unexpected side effects that can be found on other systems such as drastically reduced turning radius, braking assistance that times out (quits), throttle restrictions, and an overall disconnected driving feel. Traxxas engineers developed superior tuning algorithms that run on high-speed, precision electronic components to create a system that works invisibly, in the background, without ever limiting throttle. TSM can be fine tuned (or turned off) for different surfaces by simply adjusting the multi-function knob on the TQi transmitter, or by adjusting the slider in the Traxxas Link app. The result is driving faster, with more ease, and having more fun. In fact, the driver may not even realize how much TSM is helping until it is turned off and their driving skills are tested without it!

Everything is Traxxas-tough as you’d expect. This is short course performance on a whole new level! (click here for more details about TSM)